UNDER THE HIGH PATRONAGE OF

FRANK-WALTER STEINMEIER
PRESIDENT OF THE FEDERAL REPUBLIC OF GERMANY 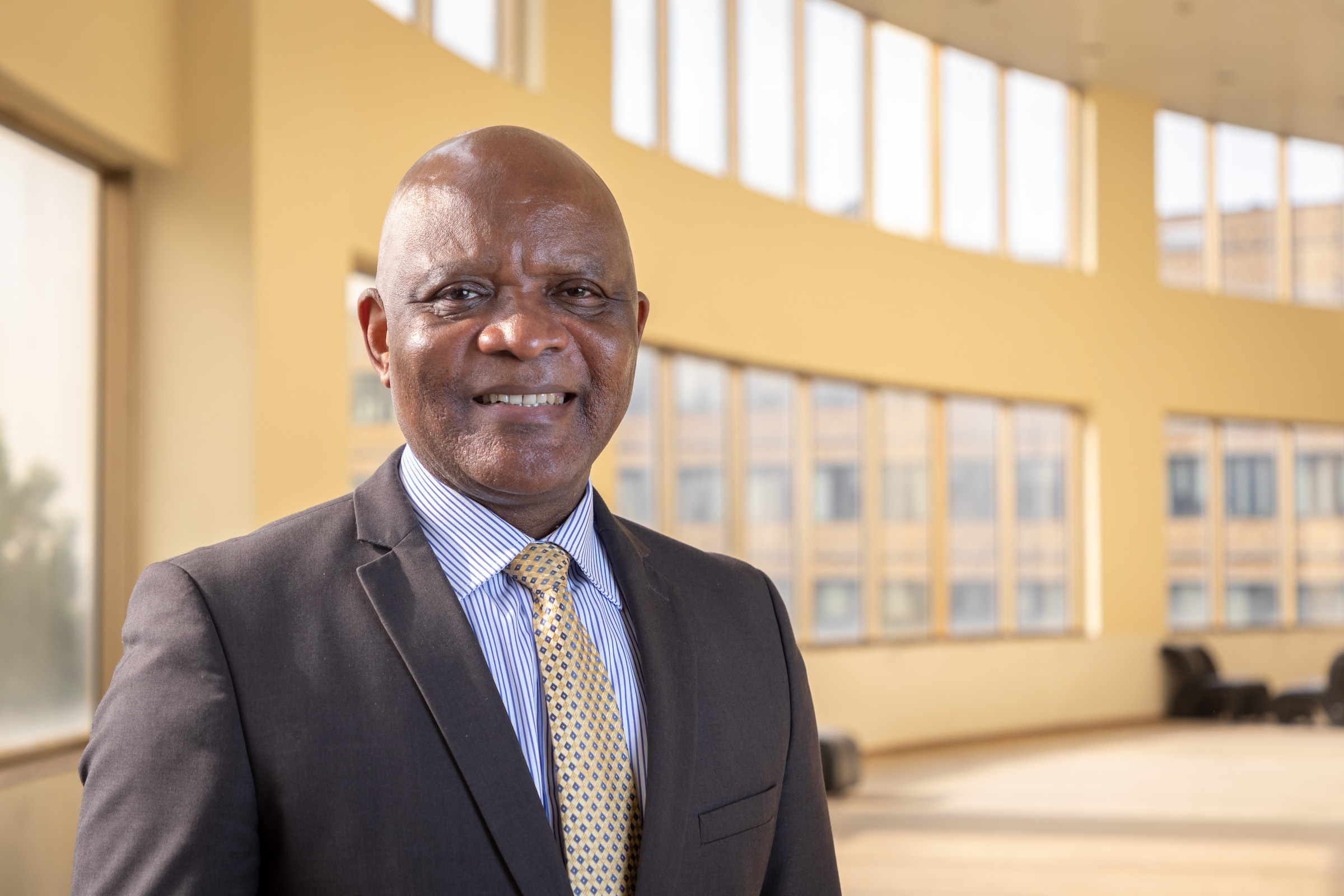 Born in Cameroon, Dr Nkengasong has over thirty years of experience in global health. He began his academic career at the University of Yaoundé studying Virology. In Belgium, he then received his M.Sc. from the Institute of Tropical Medicine Antwerp and his PhD from the Faculty of Medicine, University of Brussels, where his doctoral research in virology was the first to characterise all genetic subtypes of HIV in Africa. He also received a Diploma in Leadership and Management from the Kennedy School of Government at Harvard University.

John N. Nkengasong continued his impressive career as Chief of Virology at the World Health Organization (WHO) and subsequently as the Acting Deputy Director at the Centre for Global Health, U.S. Centres for Disease Control and Prevention (CDC). Dr Nkengasong then served as the Founding Director of the Africa Centres for Disease Control and Prevention (Africa CDC). In June 2022, he was confirmed as the US Coordinator of the Global AIDS Response and Special Representative for Global Health Diplomacy at the US Department of State – the first person of African origin to hold this position.

The Virchow Prize Committee affirms that Dr John N Nkengasong has unparalleled commitment to addressing complex global health challenges and making healthcare accessible to world’s most vulnerable. Through his various leadership roles, he has developed systemic and holistic approaches which have fundamentally shaped the global health landscape, mobilising efforts towards the attainment of the UN SDGs and “health and wellbeing for all”.

as made by Professor Dr Gerald Haug,
President of the Virchow Foundation for Global Health

for his outstanding and significant lifetime contributions towards strengthening global health.

John Nkengasong was born in Cameroon and started his impeccable and impressive academic career at the University of Yaoundé studying virology.

Continuing his outstanding contributions to understanding infectious diseases, he researched on the diagnosis, pathogenesis, and drug resistance of HIV/AIDS as Chief of Virology at the World Health Organization (WHO).

John Nkengasong then joined the United States Centre for Disease Control and Prevention in Atlanta, United States. Assigned to Abidjan, Ivory Coast, under his leadership the team created one of the first laboratories on the continent capable of precisely measuring HIV in the blood and sequencing the virus.

In 2011, Nkengasong played a crucial role in establishing the African Society for Laboratory Medicine (ASLM), a pan-African organisation strengthening laboratory networks and systems in Africa, as well as lending strong support and development opportunities to African researchers.

During the COVID-19 pandemic, John Nkengasong continued to coordinate the continent’s response and was appointed a Special Envoy to the Director-General of the World Health Organization on COVID-19 Preparedness and Response.

In June 2022, he was appointed the U.S. Global AIDS Coordinator and Special Representative for Global Health Diplomacy of the United States. As the first director of African origin, John Nkengasong is leading, managing, and overseeing the U.S. President’s Emergency Plan for AIDS Relief PEPFAR.

The utmost impressive and outstanding role which Nkengasong has demonstrated since his earliest academic and political beginnings in scientific research, underscored by his establishment of crucial global health institutions and his education and training of new generations of global health scientists, activists, and diplomats, led to the unanimous decision of the Virchow Prize Committee to award him the 2022 Virchow Prize for Global Health.

John N. Nkengasong has made exceptional contributions to improve global health, through scientific, societal, and political innovations.  He was one of the key individuals to establish the global health dynamics and infrastructures in the Global South. During his time as Director of the Africa CDC, he implemented and developed health-improving governance and cooperation, enhancing health and individual well-being on a global scale.

Addressing complex and diverse global health challenges, Nkengasong from early on in his life acknowledged the immense importance of worldwide cooperation and the necessity for systemic and holistic approaches to efficiently and effectively bridge Global South and Global North with his unparalleled commitment.

He has an exceptional track record of nurturing and supporting the younger scientific community, providing them mentorship, guidance, support, and exposure.

Before and during the COVID-19 pandemic, he remains a significantly strong, essential, and widely recognized voice in addressing systemic and health inequalities, including gender inequalities, while calling for greater and more equitable access to vaccines. This has also contributed to the increase and prevention of infectious diseases towards improving community health.

The Virchow Prize Committee is convinced that for his lifetime influence and achievements on the attainment of SDG 3 “Good Health and Well Being for All”, as well as its intersectionality with the other goals of the United Nations 2030 Agenda Sustainable Development Goals such as SDG 17 “Partnerships for the Goals”, John Nkengasong well deserves the honour of receiving the Virchow Prize for Global Health.

“John Nkengasong made the dream of a safer and fairer African continent within reach through his strikingly impressive acts of fervour and courage during the most formidable era of devastations caused by COVID-19. Despite the constraints, he fostered innovative capacities and technical capabilities in the region and beyond” says Dr Precious Matsoso, Virchow Prize Committee Member and Former Director General, Department of Health of South Africa.

“John Nkengasong has been a true leader in driving the first Centres for Disease Control and Prevention within the African Union. His contributions to policy changes, research, guidance for health workers and decision makers, emergency health system strengthening, advocacy, and access to COVID-19 vaccines for Africa have all been outstanding. Dr Nkengasong has been instrumental to Africa, through his successful risk management of COVID-19 and recent nomination as US Ambassador for PEPFAR. He is truly deserving of the 2022 Virchow Prize for Global Health”, applauds Minister Awa Marie Coll-Seck, Virchow Prize Committee Member and Minister of State to the President of Senegal.

“Dr Nkengasong has transformed disease surveillance and outbreak control for the African continent, exemplified during the exigency of the COVID-19 pandemic. His work has inspired and will have saved millions of lives”, states Professor Gabriel Leung, Virchow Prize Committee Member and Former Dean of Medicine, University of Hong Kong.

“Dr John Nkengasong has been a leader in public health for decades. From early in the HIV pandemic to his outstanding leadership during the COVID-19 pandemic as Director of the Africa CDC. He has been the voice, but also the action of the vulnerable population in Africa – and globally. An example of leadership in global health, coming from a low-and-middle income country with significant contributions”, praises Professor Patricia J Garcia, Virchow Prize Committee Member and Professor of Public Health, Cayetano Heredia University, Peru.

“John Nkengasong’s singular leadership in public health combines the excellence of a scientist with the selflessness of a human being who dedicates himself to service, driven by doing what is right for that time and context. He created Africa’s CDC’s unique space in public health, galvanizing a growing movement of experts, scientists, partners, donors, and the community at large, committed to transforming public health in Africa. This foundation was critical to Africa’s united response to the pandemic”, states Dr. Roopa Dhatt, Executive Director, Women in Global Health.